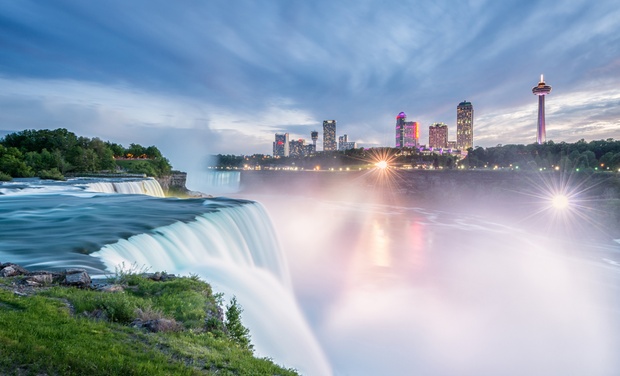 Niagara Falls is one the most wonderful creations of nature that I have ever witnessed. A single gaze at those never ending falls captures your sight right there and you never want to look away. Looking at the falls I had the feeling just like I think about how “deep” our universe is that it never seems to have an end, like if something is falling it won’t stop falling. These falls invoke the same thought in me as you cannot actually see where the falls meet the river because of the dense mist that forms out of the tremendous force with which the water falls.

Niagara Falls is actually the collective name for three waterfalls that straddle the border between Canada and the United States. From largest to smallest – the Horseshoe Falls, the American Falls, and the Bridal Veil Falls. During the peak daytime tourist hours, more than six million cubic feet of water goes over the crest of the falls every passing minute. It is famed both for its beauty and as a valuable source of hydroelectric power.

There are a lot of activities that they offer to the tourists at Niagara. One of them is the “Maid of the mist” boat ride. So, I went on to try this boat ride with my family and friends. Before we entered the boat, we were given a rain coat to protect ourselves from the mist which almost gets us totally wet (yes, the mist here can do that 🙂 ). Tourists going from the United States are given blue coats and the tourists from Canada got the red color (that’s what the color code was when I went). So, we entered the boat and found a place so as to witness the Falls as close as possible. The boat gave us a close ride (quite close 🙂 ) to the Falls going a bit inside and then made a turning at a point where it almost seemed like the whirling water will grasp our boat inside. But, relax it’s fun! At that point, it will actually make you wet, the coats did help a bit though. 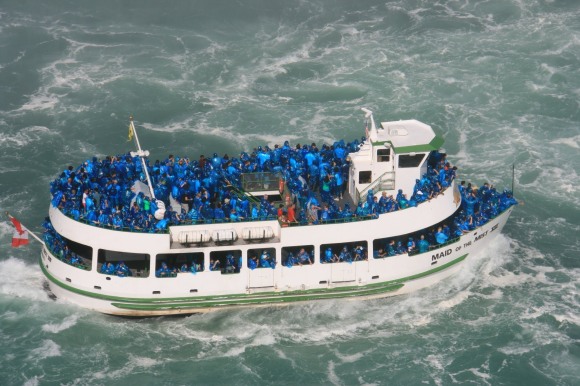 We also went on to see a short movie in which they have shown stories related to Niagara and how people in the past have tried to cross these Falls from one end to another distant end. I can recall, the story with which the name “Maid of the mist” came upon. It concerns a young Seneca girl who became immortalized in the history of Niagara Falls as first and true maid of the mist. It was stated that she was immensely saddened by the recent death of her husband and this loss started an avalanche of misfortune in her life and she lost hope of overcoming her current sorrows. Thus, one day she paddled into the middle of the roaring Niagara river and allowed the canoe to be caught by the rushing current and soon her boat was thrown over the edge of enormous Falls. It is said that she was then saved and caught by the god of thunder and lived behind the Falls thereafter. There are many more interesting stories attached to this beauty of nature, which I will leave for you to see when you visit Niagara. 🙂

Is this over yet ? No, the best is yet to come. Something that adds up to the beauty of these wonderful Falls- The evening light show. You get to experience these amazing falls with a touch of bright and beautiful colors. From a distance they focus colorful lights right on these falls and the mist does its part to spread those light particles and makes it look just wow! Don’t believe me ? Well, I captured a few of those moments, see for yourself. 🙂