Bali is an Indonesian island known for its forested volcanic mountains, iconic rice paddies, beaches and coral reefs. It is a paradise that feels like fantasy. The combination of friendly, hospitable people, a magnificently visual culture infused with spirituality and spectacular beaches have made Bali one of the best tourist attraction.

The Island is a huge devotee towards Hindu religion and culture. I even noticed a peculiar art piece which covered the tomb like ceiling of every house. It definitely looked like the construction we have in Hindu temples. Every aspect of Balinese life is suffused with religion. The primary deity is Sanghyang Widi Wasa, the “all-in-one” god, he is depicted by an empty throne wrapped in the distinctive black-and-white chessboard pattern and protected by a ceremonial tedung umbrella.

There are an estimated 20,000 temples on the island, each of which holds ceremonies at least twice yearly. With many other auspicious days throughout the year there are always festivities going on. There is this sea temple at Uluwatu, called “Uluwatu temple” which is famous for it’s “Kecak dance”, in which around hundred of men are sitting around in a circle and within that, they have beautifully depicted the “Ramayana” Sita-haran in the form of dance. There was not even a single dialogue. I loved the way they unfolded the entire plot. I managed to capture few parts of the act – 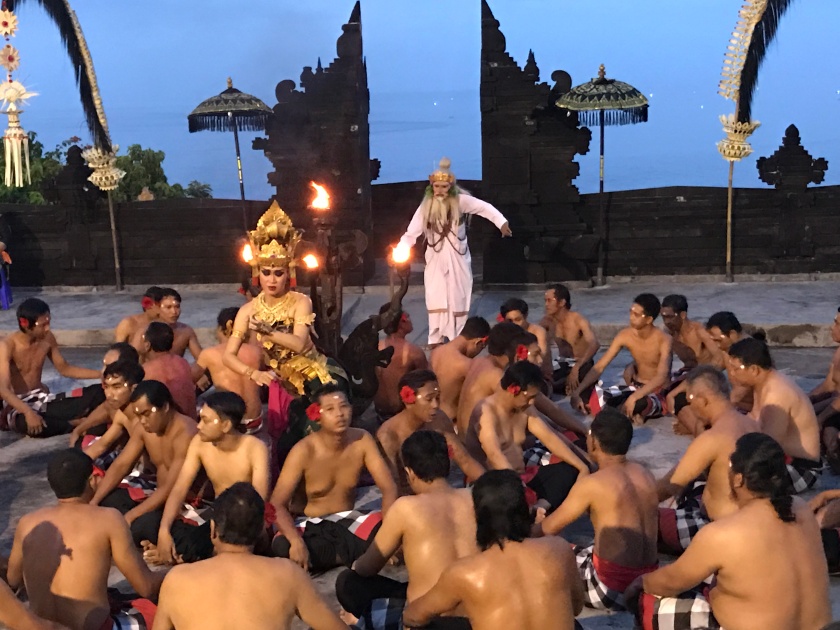 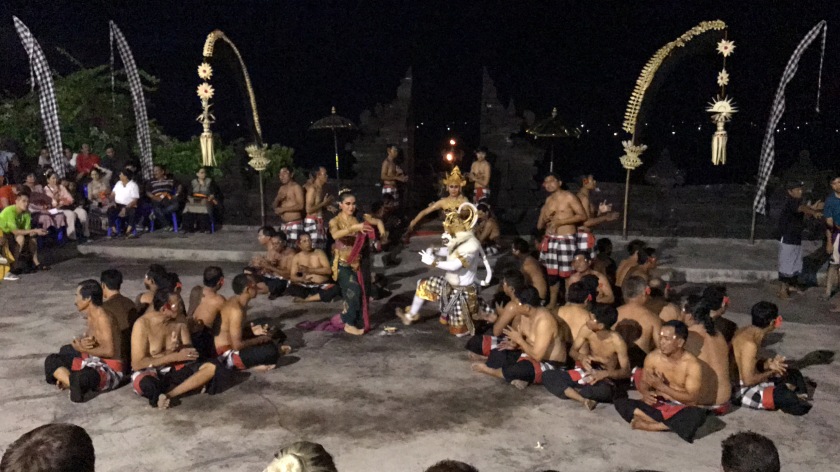 We also visited the Tanah Lot temple which is a rock formation off the Indonesian island. It is home to the ancient Hindu pilgrimage temple Pura Tanah Lot. One gets to see a tremendous view of the Indian ocean at this site. However, any tourists who want to perform any rituals or worship are not allowed to go inside the temple. We were also given a piece of cloth (I got orange, and my husband got purple), to tie around the waist line. I actually don’t know the exact reason behind it, but I think it’s mainly for those who are wearing shorts or skirts, so you have to cover it and go inside. But, anyhow I saw everyone taking that so I thought it might be some tradition that they follow. Below is a distant capture of the temple – 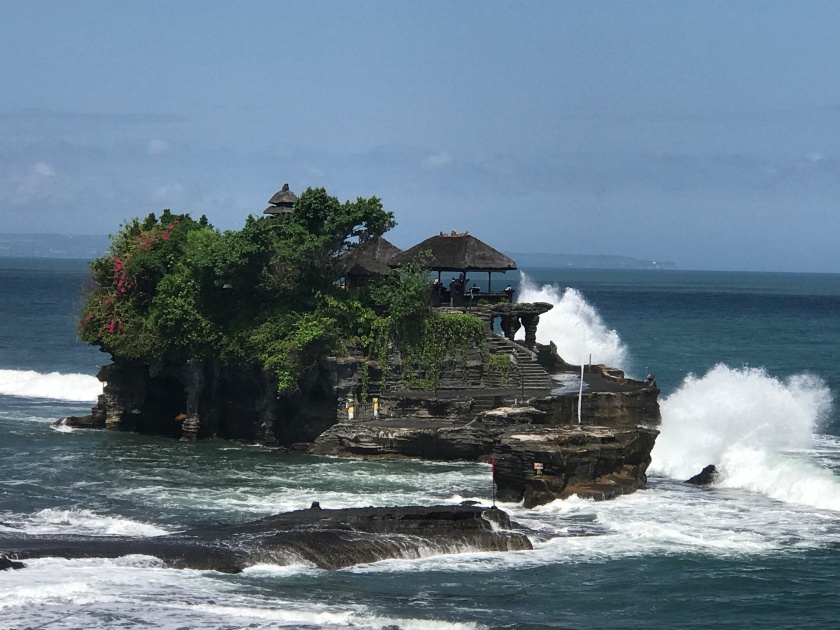 Last but not the least, the resort we stayed in – Karma Kandara. I loved it so much, that if given a chance to visit Bali again, I would definitely stay there. So, this resort had villas (positioned on a cliff) for tourists to stay in with each having a private pool, world-class spa facilities, Beach side restaurant, Infinity pool for tourists, and also lots of monkeys. :p Initially, I was scared, but they usually don’t do any harm unless you show them food. We also had to ensure that the doors are always closed as they can get in and change the map of your villa in search of food. 🙂

I am sure this post will be helpful, if you ever plan to visit this beautiful island. 🙂

Disclaimer – This blog intends to give the reader a glimpse of the tourist attractions in Bali. Any facts or other details have been taken from Wikipedia, and Wiki travels in order to present the reader with additional details about this place.